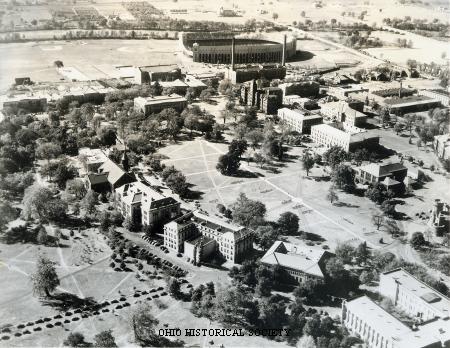 Round on the End and High in the Middle

Old man Biddle gave me a riddle just the other day,
I guessed it right away, I am glad to say,
The riddle he gave to me, I will give to you--,
And if you think you're smart like me, Let's see what you can do.

Pa and mother, my great big brother couldn't guess it right,
Tho' they tried with all their might, Just the other night,
I've got the riddle down by heart, And I ain't no fool,
I'm goin' teach this riddle too, To all the kids at school.

Round on the End, High in the Middle actually owes its roots on Broadway. In 1922, Frances White introduced Round on the End and High in the Middle, in the show called The Hotel Mouse, which had a short eleven week run at the Schubert Theater. The song was composed by Canadian born Alfred Bryan. Alfred Bryan is noted for composing such songs as Peg o' My Heart (1913), Brown Eyes, Why Are You Blue (1924) and Japansy (1928). The lyrics of the song was composed by Ned Halon, a vaudeville artist. His most notable lyrics came on the collaboration of writing M-I-S-S-I-S-S-I-P-P-I. In the 1920s, this song achieved its Ohio connection when it was sung, by the Republican Glee Club of Columbus, at the White House.

The earliest known vocal performance of Round on the End, High in the Middle, by the Ohio State University Marching Band, occurred in 1940. Dr. Richard Heine composed the familiar arrangement in 1947. In the early 1950s, Round on the End and High in the Middle was played in conjunction with the on field formation (see below), two small Os on either side of a much taller HI. The Heine arrangement was first recorded, in 1950, on Buckeye Ballad. This song has since been retired by the OSUMB.

Note: The Ohio State University Marching Band played the chorus of Round on the End. The full lyrics are provided above, as indicated within the original composition. This song has been retired from the OSUMB, in regards to playing it at Ohio State events. The MP3 file below reflects the song as it was originally written.

Listen to Alfred Bryan's and Bert Hanlon's original piano arrangement of Round on the End.

Photo: Circa 1935 Campus, Courtesy of The Ohio Historical Society